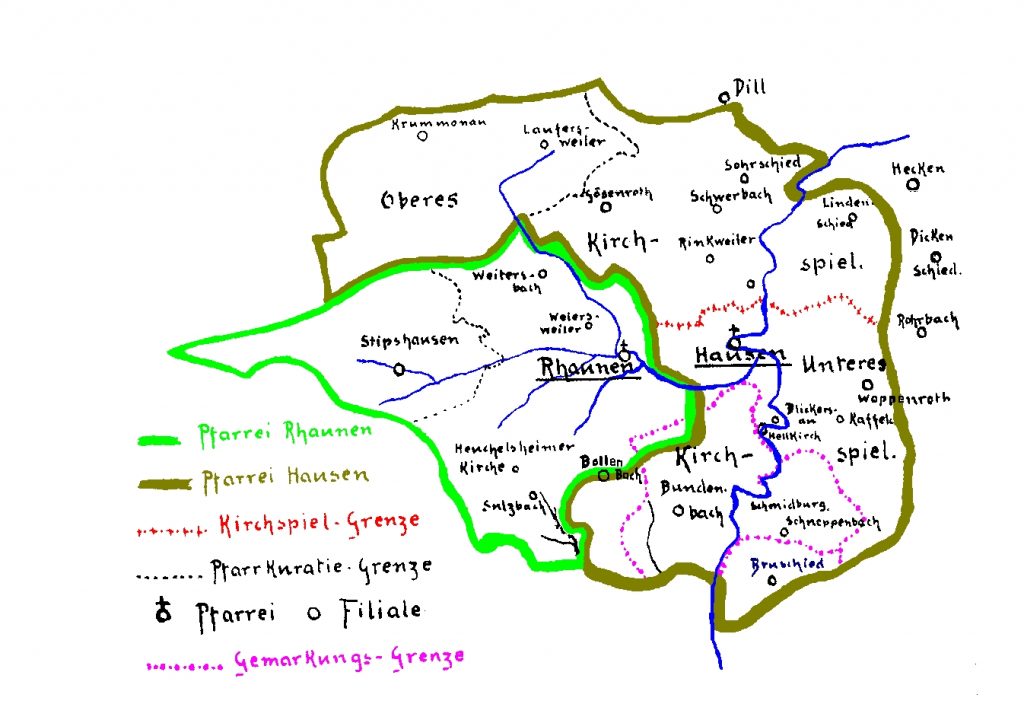 Johann Adam Meinert was born on September 3, 1823 in Bruschied (shown in the bottom right of map), Rheinland-Pfalz, Germany; one of eight children of Johann Adam Meinert and Anna Catharine Petry. His birth is recorded in Latin in the Catholic Church records of Bruschied Parish. To date, no information has been found on Adam’s childhood, though we know he left for the United States at the age of 25. Adam arrived in New York on May 24th, 1849 aboard the ship New Hampshire. Upon arriving in the States, he headed to Buffalo, and then took the Erie Canal to Beaver Falls and from the latter town to Sharpsburg by way of the Ohio River. After his arrival in the US, Johann Adam assumed the name Adam, as Johann was a very popular German name at the time (to wit: Johann Adam has a brother named Johann, which made early efforts to identify our immigrant ancestor difficult). Hereafter, I will refer to Johann Adam as Adam. 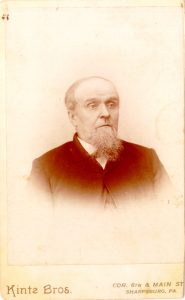 Although I have not found all of Adam’s naturalization records (petition for naturalization, declaration of intention, and certificate of naturalization), I am fortunate to know Adam’s immigration date. Using 1849 as a starting point, I was able to find Adam’s Declaration of Intent to become a citizen of the United States dated October 4th, 1852 and filed in the Commonwealth of Pennsylvania. Other mentions found regarding Adam are as a witness in sacramental records for St. Joseph’s Catholic Parish in 1849 and 1851.

Adam, as was his brother John, was a farmer; and maintained acreage in O’Hara Township for many years. That Adam was a farmer is verified in a number of places, including obituaries and various agricultural and federal censuses.

On January 24th, 1852 Adam married Margaret Elizabeth Engbard, daughter of Johann Thomas Engbard and Anna Christine Minn. Adam’s marriage is recorded in the sacramental records of St. Joseph’s Catholic Parish in O’Hara Township. Witnesses to the marriage were Johann Meinert (since the Bruschied parish birth record for Johann indicates he immigrated to the US, this Johann is probably Adam’s older brother) and Adam Altmeyer, a good friend from Bruschied that came over with Adam on the same ship. The marriage was performed in St. Joseph’s Catholic Church by Father Gibbs. At some point, Adam and his family became members of St. Mary’s Catholic Church in Sharpsburg. Adam was one of the charter members of this church and was very active in promoting the interests of the congregation.

Although the specifics of Adam’s early years in the US are unknown; land records for Allegheny county, federal population census schedules, and federal agricultural census schedules allow us to trace most of Adam’s residence up to his passing. Below is a listing of land / real estate owned by Adam Meinert.

A brief explanation is necessary to explain the entry reflecting the property purchased from Robert and Martha Elliot. In 1891, a second home was built on the western portion of this plot of land. In 1900, this property was subdivided and the two story house that sat on the eastern portion of this lot was sold to Maria Staub for $2500 as reflected in the table. Upon Adam’s death, his son sold the home built in 1891 to Anna Ritter for $4600. A new home was built for his widow Margaret; though, it is unclear where this home was built.

The approximate locations of both Adam and his brother John’s farms are shown on the map of O’Hara Twp. The brothers lived only two miles apart from each other, though there doesn’t appear to be a direct way to get back and forth from the two farms. It is interesting to note that Adam’s brother John passed his land down to his children through his will. Portions of this land are still today owned by Meinerts descended from John. They own two landscaping businesses and maintain their home on the site. Adam lived approximately two and one half miles from the city of Sharpsburg; but again, there does not appear to be a direct route. Adam likely had to go south along the Squaw Run Dr. to the Allegheny River, then west to Sharpsburg 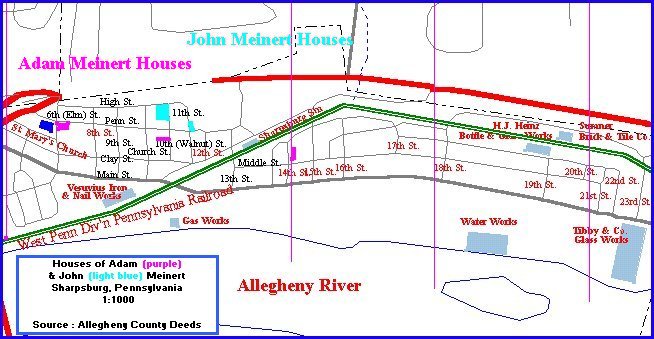 If we assume that Adam resided in Allegheny County since his immigration date circa 1848, we have a lapse in time from 1848 until the purchase of farmland in 1859 – a period of 11 years. What Adam did for those 11 years is unknown. His presence as a witness in 1849 and 1851 at St. Joseph’s Church suggests he was in Allegheny County; though, Adam has yet to be found in the 1850 census. For 18 years, from 1859 at the age of 35, until his retirement in 1877 at age 54, Adam was a farmer. The agricultural census suggests that he mostly grew potatoes, although he also grew oats and corn among other things. Although he supposedly retired and moved to Sharpsburg in 1877 (according to his obituary), he did not sell his farmland until 1881. For reasons as yet undetermined, Adam repurchased his 65.7 acres of farmland from James McLaughlin on 11/3/1884 and resold it on 6/8/1889.

Census data (note that the 1890 census was burned and thus not included) shows residences for the Adam Meinert family as follows:

Adam’s obituary states that he was survived by his wife and eight children (4 sons and 4 daughters). Sacramental records at the Diocese of Pittsburgh record the birth of nine children as listed below. By process of elimination using both of Adam’s obituaries and his wife Margaret’s obituaries, it seems that his daughter Margaret passed away prior to his death.

Adam and his wife Margaret’s obituaries mention that three daughters were in convents. These three daughters are identified above and additional information from the convent that they were members of is available for both Sisters Agnes and Clara.

Adam wrote a will on 1/20/1897 and named his son Dorotheus Meinert executor. The key components are shown below. 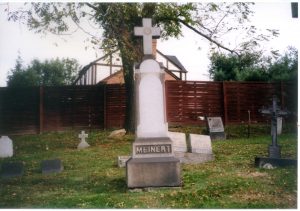 First, Adam bequeath’s to his beloved wife Margaret Meinert all the proceeds and income of all his estate after his decease, on money outstanding or on interest, rent on real estate, or otherwise.

Second, after the death of the aforesaid Margaret; the remain of said estate whatever then it may be shall fall to his living children or their lawful heirs in equal shares or parts to one as to the other exception is hereby to be made as follows:

Elizabeth Weisman geb Meinert is to retain the sum of $1250.
Adam advised his executor to have 3 Requem Masses read for him right after his decease, also 25 masses.

His funeral shall be conducted simple and not extravagant, so shall be a tombstone erected at the head of his grave not to cost over $75.00

His executor shall have the priviledge of Power with the consent of his aforesaid wife Margaret.

He appoints and nominates his son Dorotheus Meinert to be the Executor of this, his last Will and Testament.

Johann Adam Meinert passed away on 3/12/1902 in Sharpsburg, Pennsylvania at age 78. He was buried at St. Mary’s Cemetery (as shown on the above map of O’Hara Township just north of Sharpsburg) in Sharpsburg, Pennsylvania likely during the same month. His tombstone represents a family plot and simply shows MEINERT. Adam purchased this cemetery plot on 7/23/1884 for $60.00 as recorded in the cemetery records of St. Mary’s parish. Although showing only MEINERT on the headstone, cemetery records show a number of family members buried in this plot.

On the day of his passing, an inventory of Adam’s goods and chattels, rights and credits was taken by John Weisman (his son-in-law) and John Pietz (his brother-in-law) at the request of his son and executor of the estate – Dorotheus Meinert. A summary of this inventory and appraisement follows.

Among Adam and his wife’s personal possessions are many things typical of a household during that time. Included in the inventory are things like a bed, dresser, chairs, 2 tables, 2 rockers, a looking glass, a number of pictures, a clock, a gas stove (note that Sharpsburg was piped for gas around 1872), dishes, a parlor suit, vases, curtains, an easel, a lamp, kitchen utensils, and carpet. Also listed is $1500.00 of stock in the Friendship B&SA of Pittsburgh.